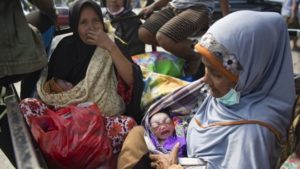 Probashbangla24 online Desk : The number of people known to have died in Indonesia in Friday’s earthquake and tsunami has risen to 1,347, disaster response officials say.

The death toll jumped on Tuesday from a previously confirmed figure of 844.

The 7.5-magnitude quake struck just off the central island of Sulawesi, setting off a tsunami that engulfed the coastal city of Palu.

Police are guarding shops against looters as people desperately search for food, fuel and water.

“After day two the food supply started to come in, it only needed to be distributed,” he said. “We are now re-enforcing the law.”

Humanitarian relief convoys entering the city are being escorted by soldiers and police.

And there are fears some survivors may still be trapped under the rubble of buildings.

Everyone we meet in Palu is focused on trying to get basic goods for their families. All normal services in the town have broken down and there’s little running water, power, food or drinking water. People are desperate.

We saw one group of armed police guarding a shop, being pressed by local people to let them in.

Suddenly the police shouted, warning everyone to back off, followed by volleys of shots fired in the air and tear gas. Some of the men threw stones at the police; for a moment it seemed it might escalate.

Yet an hour later the police backed down and let the crowd in. The atmosphere was transformed, from anger to jubilation as people came running down the street clutching shopping bags.

The police tried to stop people taking non-food items – some were made to empty the sacks bulging with commandeered produce, and hand over plastic toys and toiletries.

One officer wearily told me it was his responsibility to protect the shop – but what could he do when people needed so much?

Indonesian Red Cross officials have told the BBC that the bodies of 34 Indonesian students were found under a church buried by a mudslide.

They were among a group of 86 students reported missing from a Bible camp in the Jonooge Church Training Centre. The whereabouts of the other 52 students are not known.

“The mud conditions in that area are terrible, we have to walk about one and a half hours to reach [the mudslide area], that makes it very difficult,” Ridwan Sobri, a spokesperson for the Indonesian Red Cross told the BBC.

Mr Sobri said the identities and ages of the students could not yet be confirmed.

Rescuers are also still hunting for survivors in the ruins of a four-storey hotel in the city.

An estimated 50 people were inside the Hotel Roa Roa when it collapsed. Teams have so far recovered three survivors and nine bodies. BBC