WHO to meet on Congo’s Ebola outbreak as toll soars 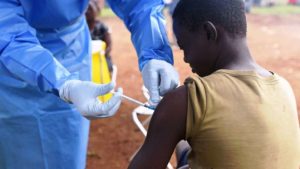 Probashbangla24 online Desk : The World Health Organization (WHO) said on Monday it would convene an emergency committee to decide whether Congo’s Ebola outbreak is a public health emergency of international concern as confirmed cases and deaths from the virus spiraled.

The committee of experts may make recommendations to manage the outbreak, which was declared on Aug. 1 and has worsened, with a risk of the virus spreading from northeastern Democratic Republic of Congo into Uganda and Rwanda.

Congo’s health ministry said on Monday that in the past week alone 33 people were confirmed with Ebola virus and 24 of them died.

The ministry said the latest cases were confirmed between Oct. 8 and 14. In total, more than 200 suspected cases of the deadly hemorrhagic fever have been reported in this outbreak, all but a couple of dozen of them confirmed, while some 130 people have died since July.

Ebola spreads through contact with the bodily fluids of its victims. The health ministry said 73 patients had received new experimental treatments. Of them, just over half recovered, 20 were still in hospital and the rest died.

A plumber for the United Nations’ peacekeeping mission in eastern Congo was confirmed to have Ebola on Friday, the first case of a UN worker contracting the disease during the current outbreak.