Probashbangla24 online Desk : Low-skilled migration will fall when the UK ends EU free movement access after Brexit, Theresa May has promised.
The prime minister said high-skilled workers would be prioritised with no preferential treatment for people from the EU compared with those from the rest of the world.
But she said a future trade deal with the EU could include an agreement on “mobility” of each other’s workers.
Business groups expressed alarm about a crackdown on low-skilled workers.
The Confederation of British Industry said it would make a shortage of care, construction and hospitality workers worse, adding: “Restricting access to the workers the UK needs is self-defeating.”
The British Retail Consortium said the policy should be based on the economy’s needs rather an “arbitrarily” drawing a line based on salaries or skills.
And Labour said the government was making a “dubious distinction” between low and high-skilled workers – saying care workers were technically “low-skilled” but were “vital to our society”.
How has EU migration changed the UK?
The detail of Cabinet on immigration
Emergency £240m to free up hospital beds
As it stands, EU freedom of movement allows people from the European Economic Area – all EU countries, as well as Norway, Iceland and Liechtenstein – plus Switzerland, to travel and work in the UK without visas, regardless of skills.
For the rest of the world, specific categories of visas are needed to come and work or study in the UK, including one for “skilled workers” – who usually have to earn at least £30,000 and have a job offer.
Currently, no “Tier 3” – low-skilled labour – visas are being given out. The UK defines low skilled roles as ones which do not require post-16 education or more than a short period of on-the-job training.
The post-Brexit immigration plans follow a recommendation by the Migration Advisory Committee, which was also backed by Labour.
The cabinet agreed to the committee’s recommendations last week, and a White Paper setting out the details is promised in the autumn.
Under the proposals:
The passports of short-stay tourists and business people from all “low-risk” countries would be scanned at e-gates – currently only EU citizens can do this
Security and criminal records checks would be carried out before visits, similar to the system of prior authorisation in the US
Workers wanting to stay for longer periods would need a minimum salary, to “ensure they are not competing with people already in the UK”
Successful applicants for high-skilled work would be able to bring their immediate family, but only if sponsored by their future employers
The new system will not cap the number of student visas
“The new skills-based system will make sure low-skilled immigration is brought down and set the UK on the path to reduce immigration to sustainable levels, as we promised,” Mrs May said.
Speaking on BBC Radio 4’s Today programme, she said free movement would end “once and for all” once the UK leaves the EU.
Asked whether exemptions would be made for industries requiring high levels of unskilled labour, she said the plan would recognise “the further needs of the economy” but that there would not be “lots of exemptions” for different sectors.
Asked whether tourists would face extra bureaucracy when they visit EU countries, she said she hoped this would be dealt with in the course of the negotiations with the EU.
The new system would aim to bring net migration to “sustainable levels”, she promised – which she has defined as being below 100,000, a target the Tories set years ago but have never met.
In a BBC Breakfast TV interview which also covered broader Brexit policy, Mrs May brushed off suggestions that there would have to be a general election or a referendum on any deal struck with the EU: The government has already announced the rights of EU citizens already living and working in the UK would be safeguarded after Brexit. 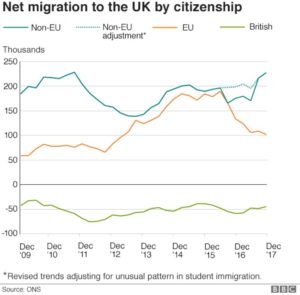 British Retail Consortium chief executive Helen Dickinson told the BBC it did not make sense to have separate rules for low and high-skilled workers.
“We shouldn’t be thinking about it like that, we should be thinking about what it is the economy needs and, from a retail industry point of view, what it is that we as consumers need in our day-to-day lives in buying the products that we are taking for granted,” she said.
CBI director general Carolyn Fairbairn said the latest proposals had “taken a wrong turn”.
“By dismissing the importance of low skilled workers to the UK economy, the government risks harming businesses and living standards now and in the future.”
Former Conservative Party leader Iain Duncan Smith predicted the UK benefits system would remain a “massive pull factor” for unskilled workers coming from the EU to compete with Britons.
Asked about the warnings of shortages in sectors like care homes if this was cut, he said investment in new technology to monitor people in their own homes was needed to reduce dependency on cheap labour.
Alp Mehmet, of the Migration Watch UK campaign group, claimed the proposals were “not likely” to cut net migration because EU migration would be replaced with arrivals from the rest of the world.
“That’s taking your foot off the brake and frankly slipping onto the accelerator,” he said. BBC