Probashbangla24 online Desk : When news broke that the Duke and Duchess of Sussex were expecting a baby, many were quick to send their congratulations.
But others focused on the timing of the announcement.
Although Harry and Meghan waited until Monday to go public with the pregnancy news, they did tell senior royals on Friday – the day of Princess Eugenie’s wedding.
“I don’t know about you, but I’m pretty sure it’s etiquette not to upstage a wedding with a baby announcement,” one dissenter, Ali Schwartz from California, said on Twitter as others shared similar opinions.
But, as some people pointed out, the public announcement was three days later – and perhaps Friday was the last chance to tell the Royal Family before Harry and Meghan left to begin their tour to Australia.
All the royal baby pictures you could possibly want, in one place
Royal wedding guests sell goody bags online
Katie Byrne, former bridal magazine editor, said “it all comes down to how this sort of news is shared”.
“A wedding is a wonderfully happy occasion and often provides a spread-out family of various different (and busy) generations a brilliant opportunity to get together and catch up.
“Telling people face to face is (obviously) so much more personal than over the phone, via WhatsApp and so on, so I think making the most of a joyous occasion to discreetly share their news is a wonderful way to tell the family,” she said, adding that other guests may have speculated about the pregnancy if Meghan was not drinking alcohol.

“Subtlety is pitch-perfect; hijacking the AV system to play the Spice Girls’ Mama while clicking through a slideshow of scan photos during the wedding breakfast, not so much.”
However, some wedding etiquette rules are much more clear-cut. Here are some of the main dos and don’ts.
Don’t propose
Proposing to your partner at weddings does happen, as documented by one unhappy bride who wrote to an agony aunt complaining that the best man stopped partway through the ceremony to propose to his girlfriend.
And in another photo, shared via a Reddit thread, a bride and groom look on as a guest proposes to his girlfriend.
According to Ms Byrne, proposing to your partner at someone else’s wedding is “really not OK” – unless with the “express permission” of the bride and groom beforehand.
She adds: “You can’t be irritated if they say ‘no’ – unless you want them to get payback and announce their pregnancy/move to Australia/etc during your celebration, of course.”
But if the bride and groom are in on a guest’s grand plan to propose, the moment could be something special, as was the case for one bride in Canada.
Jess Nakrayko was married and passed her wedding bouquet to her best friend who turned round and was proposed to by her own boyfriend.
Jess posted on Instagram: “My best friend was starting her love story – I didn’t even think about that being me giving up my day. I have love and I want people close to me to have love too.”
Don’t be distracted by your phone
So-called “unplugged weddings” have become increasingly common, to stop guests being glued to their phones throughout the day.
“Don’t forget to turn your mobile phone on to silent for the ceremony,” says Ms Byrne. “Playing with Snapchat during the hymns or live tweeting the usher’s awkward Captain Corelli’s Mandolin reading is to be avoided, naturally.”
And what about sharing photographs?
“Don’t post photographs on social media if the couple have expressly asked you not to,” she adds. “Even if they haven’t, be sensitive to what you do share; that sweet group selfie of you with the bridesmaids? Yes! That shot of the bridesmaid, slick with tear-streaked mascara and mid-happy-cry? Nope.” 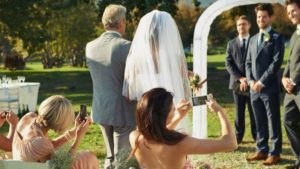 Don’t assume you have a plus one
Weddings are expensive and every extra guest makes the cost jump even more.
According to Vogue’s guide on wedding etiquette, under no circumstances can you ask for a plus one.
And if your invitation does not explicitly state you can have a plus one, do not assume you can have one.
Ms Byrne says: “No, the couple didn’t forget to mention it. You just don’t have one. Unless you are willing to foot the two-or-three figure bill to pay for their meal yourself, don’t bother protesting too hard.”
Do be a good party guest
“If you notice the dance floor is empty, go and dance,” says Ms Byrne. “Noticing it’s empty and continuing to sit in your chair or graze at the buffet does not a great party make. Go and start a conga line instead.”
And she said a bridesmaid, usher or best man should acknowledge that there will be a huge range of people attending – so “tailor any speech or surprise to that mixed audience” and “don’t say anything that will offend, mortify or upset”.
According to etiquette guide Debrett’s, avoid talking about religion or politics and make an effort to include guests who do not know anyone.
Don’t outshine the bride and groom
Black, which is traditionally associated with mourning, and white or cream, which could match too closely to the bride, is commonly considered a no-no at weddings.
But, according to Debrett’s, if you are planning to go monochrome “it’s wise to check with your hosts beforehand”.
The social etiquette guide says all-black or white outfits can be “formal, glamorous and versatile”, giving the example of Cara Delevingne, who wore monochrome when she was bridesmaid to her elder sisters. The model also wore black to Princess Eugenie’s wedding.

Ms Byrne says even though it is “typically (and unfairly) women that tend to get the ‘upstage’ warning, men can of course upstage, too – especially if the groom is an unassuming type who isn’t particularly bothered by style or fashion”.
“I think turning up in any of the following can equal a wedding day upstage: a white tux, a suit in any kind of attention-grabbing colour, texture or print, a try-hard accessory (a vanity cane, for example), a kilt at a non-Scottish wedding, a vintage Jaguar… anything that says ‘Look! At! Me!.”
And finally, don’t be like this person who posted on Mumsnet with the question: “Need a great dress to upstage a bride…what can I wear?” BBC