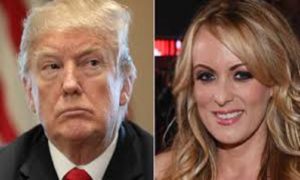 She filed the case after the president tweeted that she had invented a story about being threatened for speaking out about the alleged affair.

But the judge ruled that the tweet was protected by the First Amendment, which guarantees freedom of speech.
Stormy Daniels was also ordered to pay Mr Trump’s legal fees, although the amount is yet to be determined. Her lawyer said she would appeal against the decision.

Mr Trump has denied any relationship with the actress.

In an interview with CBS News earlier this year, Stormy Daniels said a stranger approached her while she was with her young daughter and threatened her.

She later issued an image of the man.

Mr Trump responded to her account on Twitter, saying: “A sketch years later about a nonexistent man. A total con job, playing the Fake News Media for Fools (but they know it)!”

The ruling does not affect a separate lawsuit the actress has filed against the president over money she says she was paid by Mr Trump’s lawyer, Michael Cohen, to keep quiet about the alleged affair.

In August, Mr Cohen pleaded guilty to violating campaign finance laws during the 2016 presidential election over payments to two women who said they had sexual relationships with Mr Trump. He said he made the payments at Mr Trump’s request. BBC