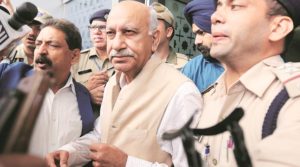 Probashbangla24 online Desk : Union minister MJ Akbar on Monday filed a criminal defamation case in Delhi’s Patiala House court against journalist Priya Ramani who, along with over 10 other women, had accused him of sexual harassment, PTI reported.

The minister filed the legal suit through his advocates Karanjawala and Co. a day after he released his first official statement over the alleged charges of sexual harassment against him.

The Minister of State for External Affairs has accused Ramani of “wilfully, deliberately, intentionally and maliciously” defaming him and has sought the issuance of notice to Ramani under section 499 (defamation) and section 500 of the Indian Penal Code (IPC). Section 500 of the IPC provides that an accused may be awarded two years jail term or fine or both in the event of conviction.

In line with his yesterday’s statement, the complaint mentions the accusations being circulated “in a motivated manner for the fulfilment of an agenda”. It termed the allegations made by Ramani as “scandalous” and “very tone and tenor” ex-facie defamatory. It also stated that the allegations have not only damaged the minster’s goodwill and reputation in his social circle but also affected his reputation in the community and friends, family and colleagues, causing irreparable loss and tremendous distress.

In a statement released on Sunday evening, Akbar dismissed the allegations of inappropriate behaviour, sexual harassment, and molestation against him as “false and fabricated” and “spiced up by innuendo and malice”. “Why has this storm risen a few months before a general election? Is there an agenda? You be the judge,” he said in the statement.

Talking about Ramani, his colleague in the Asian Age where he was a senior editor, Akbar stated an article written by her last year where she had mentioned the incident but had not named him. He said that Ramani had not named him earlier “as she knew it was an incorrect story”. He recalled that when Ramani was recently asked “why she had not named me”, she had tweeted: “Never named him because he didn’t ‘do’ anything.”

Ramani was the first woman who had alleged the charges of sexual harassment on Akbar. In a tweet on October 8, she had revealed that an article she had written last year about an editor inviting her to his hotel room for a job interview and asking her to sit on the bed with him, was Akbar. Ramani, formerly of India Today, The Indian Express, and Mint, went on to join Akbar’s team at the Asian Age. Several other women journalists who had worked with Akbar followed with similar accounts, and some of them spoke to The Indian Express about their experiences.