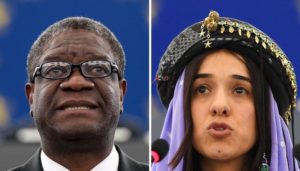 Congolese doctor Denis Mukwege and Yazidi campaigner Nadia Murad won the 2018 Nobel Peace Prize on Friday for their work in fighting sexual violence in conflicts around the world.

The pair won the award “for their efforts to end the use of sexual violence as a weapon of war and armed conflict,” Nobel committee chairwoman Berit Reiss-Andersen said in unveiling the winners in Oslo.

“A more peaceful world can only be achieved if women and their fundamental rights and security are recognised and protected in war,” she said.

One a doctor, the other a victim of rape, both have come to represent the struggle against a global scourge which goes well beyond any single conflict, as the #MeToo movement has shown.

The prize was announced as #MeToo marks its first anniversary after a year in which allegations of sexual abuse, rape and harassment have toppled dozens of powerful men.

By recognising the pair’s work, the Nobel committee has placed a spotlight on the use of sexual violence in war as a global problem.

Mukwege, 63, was recognised for two decades of work to help women recover from the violence and trauma of sexual abuse and rape in the war-torn eastern Democratic Republic of Congo.

Women, children and even babies just a few months old, Mukwege has treated tens of thousands of victims of rape at Panzi hospital which he founded in 1999 in South Kivu.

Known as “Doctor Miracle”, he is an outspoken critic of the abuse of women during war who has described rape as “a weapon of mass destruction”. AFP