Probashbangla24 online Desk : Russian President Vladimir Putin has labelled poisoned ex-Russian spy Sergei Skripal a “traitor” and “scum”.
In a speech he complained that the media were treating Mr Skripal as “some kind of human rights defender”, whereas he had betrayed his country.
Mr Skripal and his daughter survived the Salisbury attack, which the UK says was carried out by two agents of Russian military intelligence.
But a British woman died in another poisoning that police say was linked.
UK authorities believe the Skripals door was targeted with the nerve agent Novichok. It was sprayed from a modified perfume bottle that was later picked up and given to Dawn Sturgess, who died in July, they say.
Russian woman ‘identifies’ Salisbury suspect
Last month, President Putin insisted that the suspects named by UK police as Alexander Petrov and Ruslan Boshirov were civilians not criminals, and urged them to come forward.
He said on Wednesday that he thought the whole “information campaign” surrounding the former Russian spy who defected to the UK had been “blown up” and that it would pass, “the sooner, the better”.

The two suspects gave a televised interview the day after Mr Putin’s initial intervention claiming to be “just tourists” visiting the city of Salisbury because of their interest in its 123m (400ft) spire.
Skripal suspects: ‘We were just tourists’
Russian spy: What happened to the Skripals?
Russian spy poisoning: What we know so far
However, their story was widely mocked in Russia as well as the UK and one of the men was subsequently identified by an investigative website as Colonel Anatoliy Chepiga, an officer in Russia’s GRU military intelligence.
The website, Bellingcat, said the colonel had been made “Hero of the Russian Federation” by President Putin himself in 2014. 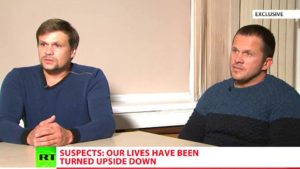