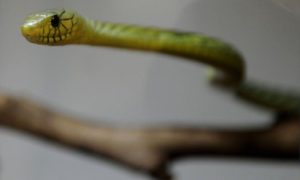 Probashbangla24 online Desk : A highly venomous green mamba snake that escaped from its presumed owner on Tuesday after biting her in the Czech capital, Prague, has been caught.
The snake had gone into hiding in a Prague district and residents were placed on alert and warned to keep an eye out for the reptile.

The woman, who had not registered the snake, is in an induced coma at a city hospital after receiving an antidote.

The snake was caught in a tree near its home on Friday.
On Wednesday, police and paramedics were called to a house in Hlubocepy district in the south of the city where the woman was found unconscious.

The house was evacuated, and herpetologists (zoologists who specialise in the study of snakes) were called in to help locate the reptile.

Children at a nearby kindergarten were kept inside as a safety measure.

It was thought the snake was unlikely to leave the house because of the recent cool weather, but in the end it was found on a tree about 200 metres (656 ft) from its home.

He said that the mamba may have left its hiding place inside the house on the day of its capture after the weather warmed up.

“I would like to know when the snake set out on the trip, but yesterday’s [Thursday] warm afternoon and a nearly subtropical Friday made it easier,” he added.

The woman who found it in her garden wrapped around a tree said she was still in shock and added that the snake appeared to have “had enough” too, reports say.

Experts say the green mamba’s venom spreads fast, and its bite can be fatal in as little as 30 minutes. BBC