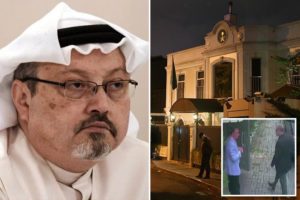 Probashbangla24 online Desk : It took seven minutes for Jamal Khashoggi to die, a Turkish source who has listened in full to an audio recording of the Saudi journalist’s last moments told Middle East Eye.

Khashoggi was dragged from the consul-general’s office at the Saudi consulate in Istanbul and onto the table of his study next door, the Turkish source said.

Horrendous screams were then heard by a witness downstairs, the source said.

“The consul himself was taken out of the room. There was no attempt to interrogate him. They had come to kill him,” the source told MEE.

The screaming stopped when Khashoggi – who was last seen entering the Saudi consulate on 2 October – was injected with an as yet unknown substance.

Salah Muhammad al-Tubaigy, who has been identified as the head of forensic evidence in the Saudi general security department, was one of the 15-member squad who arrived in Ankara earlier that day on a private jet.

Tubaigy began to cut Khashoggi’s body up on a table in the study while he was still alive, the Turkish source said.

As he started to dismember the body, Tubaigy put on earphones and listened to music. He advised other members of the squad to do the same.

“When I do this job, I listen to music. You should do [that] too,” Tubaigy was recorded as saying, the source told MEE.

A three-minute version of the audio tape has been given to Turkish newspaper Sabah, but they have yet to release it.

In 2014, London-based Saudi newspaper Asharaq al-Awsat interviewed Tubaigy about a mobile clinic that allows coroners to perform autopsies in seven minutes to determine the cause of death of Hajj pilgrims.

The newspaper reported that the mobile clinic was partly designed by Tubaigy and could be used in “security cases that requires pathologist intervention to perform an autopsy or examine a body at the place of a crime”.

These are the first details to emerge of the Saudi journalist’s killing. Khashoggi was last seen entering the Saudi consulate in Istanbul on 2 October to retrieve paperwork.

To date, Saudi officials have strongly denied any involvement in his disappearance and say that he left the consulate soon after arriving. However, they have not presented any evidence to corroborate their claim and say that video cameras at the consulate were not recording at the time.