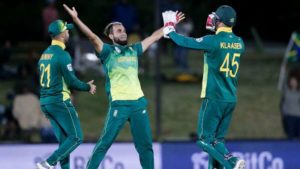 Probashbangla24 online Desk : Despite Peter Moor’s stunning assault (21-ball 44), Zimbabwe slid to a 34-run loss against South Africa in the first of the three-match T20I series in Buffalo Park.

With Tahir running through Zimbabwe’s batting unit, the visitors were in dire straits at 70 for 7, in pursuit of 161. However, Moor’s cameo gave Zimbabwe hopes of pulling off a heist. He looked to target the midwicket region with flat-batted swipes off Tabraiz Shamsi as he thumped four sixes in a row in the 15th over. Brandon Mavuta joined in the act by lifting Junior Dala for two fours and a six in the next over.

With the visitors needing 38 off 25, a few nerves would have been jangling in South Africa’s camp. South Africa, though, got a lucky break in the form of Mavuta’s wicket. The lower order batsman sliced a a full toss off Dala to the fielder positioned at third man.

The wicket of Mavuta put South Africa back in the ascendancy. Lungi Ngidi, the spearhead, cleaned up Kyle Jarvis. With only Chris Mpofu at the other end, Moor attempted to slog Andile Phehlukwayo but could only find Christiaan Jonker at long off. It was the first time in his innings that Moor mishit one of his shots, and unfortunately for him it led to his dismissal.

Earlier, while chasing down a competitive target, Zimbabwe needed a solid platform. However, Tahir put paid to such hopes by prising out Chamu Chibhaba with a quicker one. Tahir continued to cause trouble for the opposition side by snuffing out Hamilton Masakadza LBW in his second over. He then was on a hat trick as he dislodged Tarisai Musakanda with another googly.

Sean Williams survived the hat trick ball with a drive through covers. The duo of Williams and Brendan Taylor also shared an alliance of 29 for the third wicket to give Zimbabwe some respite. Just when the pair was looking to up the ante, Taylor was sent back to the pavilion, with Quinton de Kock pouching a stunning catch behind the stumps. De Kock, known for his athletic brilliance, flew in the air towards the leg side to pouch a brilliant one-handed catch.

Tahir returned to the attack to dismiss both Williams and Elton Chigumbura, and for the second time in the game, he was on a hat trick. Even though, he couldn’t pick up the hat trick, Tahir finished with impressive figures of 5 for 23.

For South Africa, Rassie van der Dussen scored a fifty on his T20I debut and also strung together a stand of 87 for the fourth wicket with David Miller to prop up the innings. Faf du Plessis, the captain, also played his part with a fine knock of 34.

On the other hand, Jarvis and Mpofu bowled with excellent discipline both with the new and old ball to share five spoils between them. The duo used yorkers and mixed up their pace to give away just 11 runs in the final two overs.

Despite a comfortable victory, the South African camp would be a tad worried with their bowling in the slog overs. The dew factor came into play during the second innings, but when Moor played with an aggressive intent, Dala and Shamsi struggled to handle the pressure.

The second T20I of the three-match rubber will be played at Senwes Park in Potchefstroom on October 12.