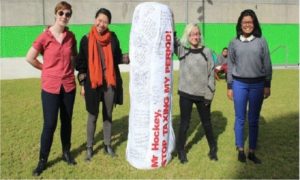 Probashbangla24 online Desk : Australia will remove a controversial tax on female sanitary products following years of campaigning by women’s groups.
Currently, tampons and sanitary pads are sold with a 10% goods and services tax (GST) because they are categorised as non-essential items.

Women have argued it is an unfair classification, noting items such as condoms and sunscreen are exempt.

Federal and state governments agreed on Wednesday to remove the levy.
“We’re really delighted that everyone’s come on board to scrap what is an unfair tax,” Minister for Women Kelly O’Dwyer told Sky News Australia.

“Millions of women right across the nation will be very thankful for it.”

Widely known as the “tampon tax”, the levy on sanitary products has drawn protests since the GST was introduced in 2000.

Many women, including long-time campaigners, celebrated the change on Wednesday.

The decision was brought on by the federal government, which had previously faced opposition from state and territory counterparts over estimated falls in tax revenue.

In 2015, a petition against the tax was signed by more than 90,000 people. Campaigners even produced a rap video.

Australia’s states and territories stand to lose about A$30m (£16m; $21m) in revenue because of the change.

Prime Minister Scott Morrison has previously said that sanitary products should not have been included when the GST was introduced.

In July, India scrapped its 12% tax on sanitary products following similar campaigns. The UK retains a 5% tax, although activists have called for it to be removed. BBC